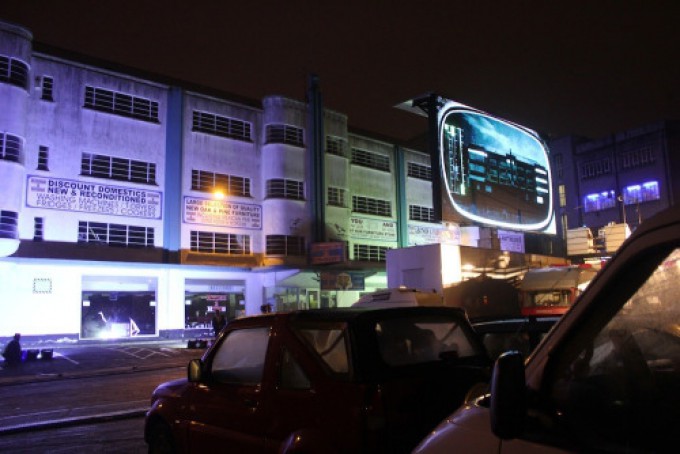 Sentient City expands on an original concept devised by Part Exchange Co in 2011 for its performance event, Drive in Deco; www.hiddencity.org.uk – that buildings are sentient, absorbing and retaining significant changes and events in their own lifetimes as well as being repositories for the stories and experiences of the humans who have used and loved them.

The 2011 event took the form of a large scale awakening of a forgotten and at risk heritage art deco building, through ‘new technology’ that allowed spectators to experience the story of the building through a fusion of projection mapping and a narrative driven soundscape, all inspired by historical, architectural and local community sources. This was then translated live into music creating the buildings own symphony.

The Engine House is now working on developing a blueprint that can be applied to further buildings in a similar at risk, forgotten or undervalued predicament by adapting and simplifying the previous model and concept, in order to build a city of sentient buildings that can be ‘awoken’ to tell their stories and play their songs both on-line and in the real world.

Narrative in relation to the spectacular audio visual projection mapping format is barely explored, this project is doing that. Bringing Tom Newell Audio visual artist and Tracy Harris, writer, film maker and perfrmance artist, together to explore the links between the visual, the musical, text and narrative,

The project intends to expand on the understanding of the story of the city through bringing back into the picture buildings, stories and communities whose history or inherent value is generally unknown or overlooked and for whom the future may be uncertain.