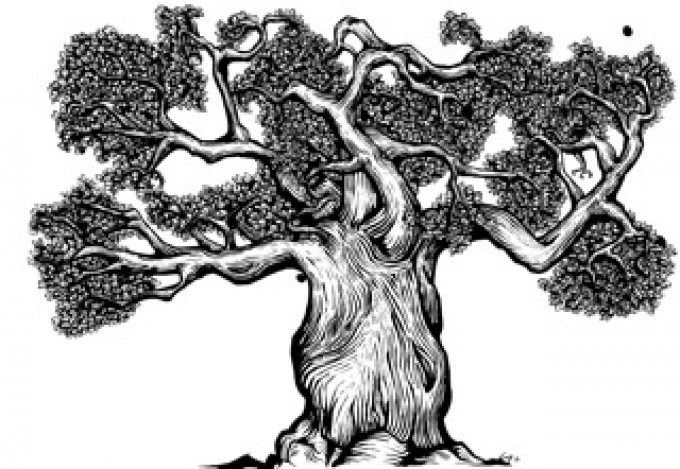 Earthed: The Trees’ Tale is a giant piece of green storytelling by Part Exchange Co and a project that has grown over nearly two years via collaboration with communities, visual artists, land artists, a sound designer, director, writer, numerous schools, community members, historians, archivists, environmentalists, geologists and many more.

It’s for anybody who’s ever climbed a tree, built a den, hidden in undergrowth, jumped in a puddle, dug a hole, swum in the sea or traipsed through mud for the hell of it – and for anybody who’s done none of these things, but wishes they had. It’s about where we’ve sprung from and how we might come to understand our roots in a new light.

Beginning in 2015 and taking place across four seasons into 2016, four connected audio stories will be told by the ancient trees in four of the city of Bristol’s green spaces. Using GPS technology, audience members will locate the trees and listen to a tale 40,000 years in the making about humans’ relationship with the Earth, moving us from the past to the present and encouraging all of us to revisit our connection with the land beneath our feet.

The aim that drives the piece is this reconnection, inspiring people to re-experience the natural world with awe, wonder and joy. We want to do this by telling a new story, inspired by our own and the city’s relationship to the land, revealing and reawakening the phenomena of the natural world for every generation by asking the ancient trees – some of the oldest citizens of the natural world and the lungs of the city – to tell their story to us.

Each story instalment also makes audible usually hidden cyclical processes of growth and decay from a delicately balanced bio-diversity, firing the imagination and building knowledge, understanding and care for our trees, the environment and the role they – and we – play in our nature-rich urban eco-systems.

So – why do we need to tell a story to achieve these aims?

The answer lies in a rich global history of stories that connect human beings and the Earth: an instinct that lies within our DNA and seeks to understand the enduring mystery of our presence on the planet.

Stories have been created the world over to find explanations for the Earth’s natural phenomena, addressing universal questions: where are we from? Why is the world separated into land, sea, and sky? How can we live in balance with the unpredictability of nature? How do we place ourselves – humans – in the multitude of forces in the universe?

The earliest stories – some widely transposed now as written myths – simply began as physical rituals pre-dating language: more like urges than stories, they were born of primitive desires to engage with and comprehend the natural world and humans’ place within it. Burying the dead was one of these early urges, a combination of gesture and nascent story, suddenly placing ourselves within a ritualised, storied environment.

Humans came first and then the Gods followed, anthropomorphising the sun, the sky, the sea, the wind and Mother Earth herself – bringing order from chaos. This was the function of story: to seek understanding in a world we were struggling to comprehend.

In the long view of the history of mankind, four essential functions of mythology can be discerned. The first and most distinctive – vitalizing all – is that of eliciting and supporting a sense of awe before the mystery of being.

Humans’ early stories about their relationship to the Earth were passed on from teller to teller, generation to generation, mutating and changing in relation to their environment and to serve their audience.

Fast-forward twenty thousand years or so and we get the emergence of rational science – the Enlightment. It moved us away from a connection to the land, the sense of living in balance with the unknown, negotiating the territory, and moved us into an unchallenged position of status and control over the very physics of the Earth, demythologising and debunking a particular mode of cultural understanding that came from the supernatural and the spiritual. These stories (including the religious doctrines) were downgraded to artefacts.

We are now a twenty-first century audience and our current stories – of civilisation, of industry, of limitless growth – are becoming more and more fragile as the Earth and its people suffer greater atrocities both environmental and humanitarian.

These stories – our myths, if they can be termed as such – do not inspire awe. Our myths do not protect us. This world view needs challenging.

It is hard, today, to imagine that the word of a poet was once feared by a king. There are the serious stories told by economists, politicians, geneticists and corporate leaders…all their stories are only variants of the larger story of human centrality, of our ever-expanding control over ‘nature’, our right to perpetual economic growth, our ability to transcend all limits.’

Earthed: The Trees’ Tale refers to itself as a ‘giant piece of green storytelling’. I believe the sort of ‘green storytelling’ we need is one that carries an invitation to re-imagine the future. That doesn’t mean we can’t use the past in our stories – reimagine it, celebrate it, recalibrate our perception of it – all of those dynamics might be tools for imagining the future differently: but maybe we need something more drastic.

The fourth part of our story dovetails with the present time but attempts to shift an audience’s perception of what the world looks like and how they relate to it. It releases them straight back into a real green space from a fictional one, but with a new set of questions to ask about their place alongside the Earth rather than in opposition to it. It’s asking for a culture shift, in other words, away from the finger-pointing blame culture of much green politics.

Journalist Andrew Simms suggested in the Guardian on New Year’s Eve 2013 that it’s only stories with deep cultural resonance that will allow people to reconnect with environmental issues.

He cites among the authors who offer this opportunity Hans Christian Andersen, Dr Seuss and Philip Pullman – all authors who, interestingly, are often associated with childhood readers – but also all storytellers who lean heavily on allegory, metaphor, the complications around moral and ethical teachings and the transcendence one can find through newly-created magical cosmologies populated by talking toys, knives that can cut through universes and tongue-twisting languages.

These are elements, to my mind, that convincingly reposition human beings in relation to themselves and the world. We need to look outside reality to understand it better, then return to ourselves and begin to change what that future reality – and that deep culture that we all share – might be.

People talk about saving the Earth. Perhaps in story terms what we’re looking for is what philosopher Paul Ricoeur coined as a ‘saving paradigm’ – the need for story to look forwards, not backwards. Story and myth is not only a way of arranging history and organising where we’ve come from, but re-arranging the present and modelling or suggesting where we might go next.

Earthed: The Trees’ Tale is a story waiting to make its own invitation to an audience to redefine the future. It’s poised to spring up from the trees within the city and call the people to look at their world differently. It might be through this reconnection, this reinvigoration of our own relationship to the Earth, that we can all start looking towards a new beginning.

“Myth may imply a hierarchy, but it should also imply a horizon: it is a disclosure of unprecedented worlds, an opening onto other possible worlds which transcend the established limits of our actual world.’

Earthed: The Trees’ Tale is ready to happen with an incredible team in place, and we can’t wait to share it with you. But to do so, we need your help.

A huge thank you from the whole Earthed team for any support you can give us!