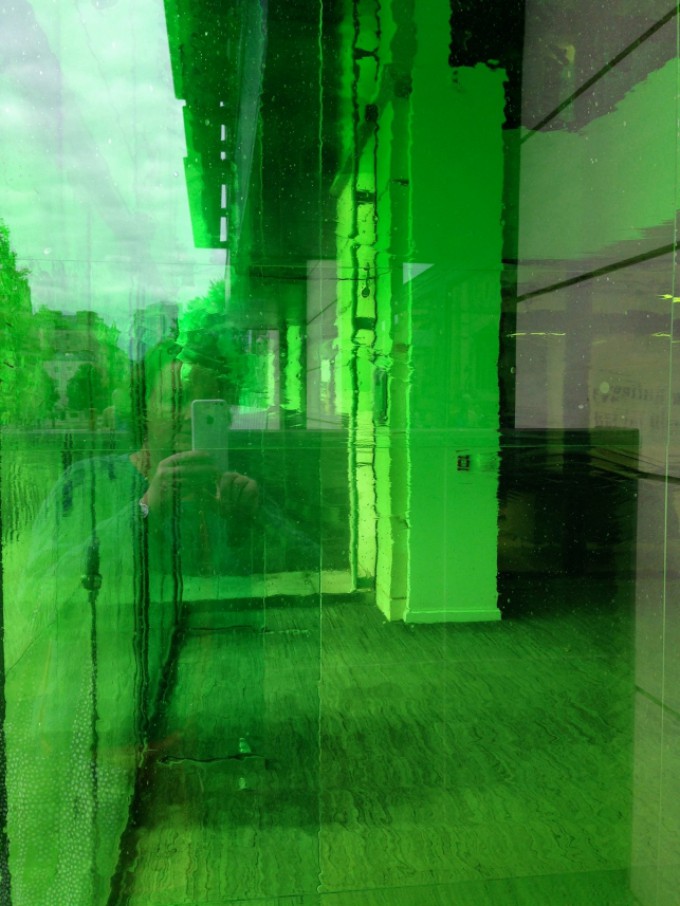 I had never been to Horizon House – never heard of Horizon House – when it was allocated to me.  I was sent a pack of information: it’s a new building, open for five years, home to the Environment Agency.  It is an environmentally considerate building, powered by the sun and earth, using harvested rain water and with a roof garden where employees can plant flowers and vegetables.  My first response was to think of the building as a kind of benevolent mother-goddess/Gaia building.  Then I visited it.

My first reaction was to the entrance: a thick sheet of glass, full of pits and bubbles, that echoes the stained glass in the Cathedral opposite, but is modern, fresh, surprising and seemed to me to encapsulate the ethos of the Environment Agency.  It is a glorious rich shade of green. My next reaction was to realise that this building might be an environmental masterwork, but it is primarily a busy, purposeful, pragmatic place of work.  I felt that my piece should reflect that, so I thought I would build my story around a person who works in the building.

The challenge with this piece of work was to try to reflect the unusual nature of the building without just listing its eco-properties, and to have someone working at the Agency without simply writing a job description.

So I decided to focus down on what most attracted me about the building – the green.  Green seemed to encompass so much of what the building and the agency are about.  So I worked with that, and with the multiple meanings and appearances of green.  Once I remembered that ‘green’ could mean someone who was ‘wet behind the ears’, I had my character.

I really enjoyed being at Horizon House on Open Doors day.  It was very busy – they’ve had 1,000 visitors in the past, and I imagine they equalled that this time.  The staff were friendly and informative – I had a fascinating discussion about the legalities of waste disposal, somewhat to my surprise.  Many of them took the time to share descriptions of their working lives with me, and tell me what they thought of the building (without exception, their experience was positive).  I engaged with members of the public who told me that they thought the building ‘was the way forward’, was ‘fascinating’, made working life ‘wonderfully varied’ because of the choice.  One woman, now retired, told me it made her want to go back to work.  ‘Not quite,’ she added after a moment.

The performance at the end of the day was nerve-wracking.  The acoustics weren’t great, and    I was up after a children’s choir – the definition of a hard act to follow.  But there was a fair- sized audience of staff and public, including one man who’d returned especially to listen to the reading.   They seemed to like it!  Staff were kind enough to tell me they enjoyed the story, and that it rang true.  I couldn’t ask for more than that.

(Click here to listen to a recording of the original performance)

Green: of the colour which in the spectrum is intermediate between blue and yellow; in nature chiefly conspicuous as the colour of growing herbage and leaves.  The colour of grass, foliage, an emerald etc

Jade ran up the steps beside the cathedral and hurtled down Deanery Road, skidding to a halt outside Horizon House.  Why could she never be on time, and on this day of all days.   Still, it wouldn’t do to arrive in a panting lather so she thought she’d give herself a moment.   She hadn’t been here before, her interview had been on Skype.   She stared at the entrance, the thick sheet of glass.   It was rippled and knotted, no smooth factory perfection here.  That green!  It had a particular, deep rich quality, like when you’re in a beech forest and you look up through the leaves at the sun, she thought.  No, darker than that.  More, the depths of a Wiltshire trout stream, the shadows below the water-crowfoot and starwort as they sway in the flow, concealing fish idling in the shallows.  That’s what it made her think of.

She was pleased she’d pinned it down.

But now she was officially really quite a bit late.

She pushed open the door.  The sun through the glass made the shade green.  What was that poem?  Oh, this was going to bug her.  She took out her phone and started to Google ‘Poem.  Green,’ when she saw the eyes of the security guard on Reception.   She was being watched.  Calmly, firmly but definitely.  Maybe he thought her smart phone was the trigger for a bomb that she’d placed, maybe…  Jade put her phone away, and approached the front desk.

“Hi, I’m Jade Forester.  Here to see Mr….” pause while Jade searched for a name, something she thought in retrospect, that she should have done beforehand if she wanted to appear cool, calm and sorted.  “Here to see Mr Hilton.”

“Right you are,” said the man on reception.

Jade leant in towards him, “It’s my first day.”

He could have worked out it was her first day by the definite gleam of panic in her eyes, and the colour of her face.

Green: having a pale, sickly, or bilious hue, indicative of fear or sickness…

Jade sat.  She stood up, then she sat down again.   She’d done yogic breathing once, maybe that would help now.  She breathed in through her nose…and out through her mouth…..in ….. out…. In…. out…  She started to feel a little light headed.   She decided to focus on the foyer.  Everything was green, both in colour – a mixture of pea green carpet, moss green sofas and murals in a kind of sap green – and, she assumed, in what they were made of, environmentally friendly, recycled, low energy making the teeniest tiny footprint on the planet.

Green:  of a product, service etc, designed, produced or operating in a way that minimizes harm to the natural environment.

There was sign which read ‘Creating a Better Place.’  Yes, she thought.  I’m on board, 110%.   Can’t say better than that.   So.   Where was Mr Hilton, Jeff Hilton in fact, Jeff Hilton, Programme Manager, Jeff who would be her boss, Jeff who was now walking towards her with a surreptitious but somehow blatant glance at his watch.

He hates me, she thought.

Pah, she thought, but it was a hesitant sad little pah.

“Let’s walk and talk,” said Jeff and led Jade through the swishing glass gates to the atrium.   Jeff’s phone rang.  “I’ll catch up with you in five.”   Jade breathed in… out….  A man in shirt sleeves brushed past them.

“Waste fire in the Wirral,”  said shirt sleeves and disappeared into the Incident Room.

“Stairs, definitely.  I hate a lift, I don’t like the way the doors close, it’s a bit of tin box, you feel so trapped don’t you -”  Stop wittering, give a good impression, focus on something else, the banister.  Nice wood.  It could be ash, it had that pale blond look….Ash Die-Back….  “Only the ash, the bonny ash, burns fierce when it is green.”  Walter de la Mare, now, really?  Walter de la Mare?

“Where will I be based?”  There.  She could ask a sensible question.  Really she could.

“We hot desk here.  You can go where you like,”  Jeff gestured widely at the floors that opened up in front of Jade.  It was buzzing, busy, people on phones, on computers, in meetings – purposeful people, people who knew what they were doing….

“But I’ve set you up on the fourth floor, so you can settle in, given you a locker, for your … personal stuff.”  Catching the glance that Jeff gave her, Jade wondered whether the choice of bag was quite the right one.  She loved the bag, loved the emerald velvet, but was it a bit….hippy?  A bit … casual?  Had she mistaken the tone?  She’d probably mistaken the tone.

Jade gaped.  She could see for miles.  To the edge.

They passed some pods: one desk, one phone, a door.

“Whose are these offices?”

“They’re if you fancy a bit of peace and quiet.  Some alone-time.”

Jade hovered outside one, placing a hand on the glass.  Alone time.  Yes, that’s what she fancied.  To be alone.  Hermit alone.  Green martyrdom the Irish called it.

Green martyrdom:  the denial of desires, as through fasting and penitent labours, leaving behind all possessions, titles, relationships for the Kingdom of God.

To cast aside the comforts and pleasures, such as emerald velvet bags, to sit in silence on a mountain, or a remote, inhospitable island.  That’s what had drawn her to the Environment Agency: the untouched places, places where waves crashed on rocks, where storms lashed barren moors.  Places that were wild.   Places that should stay wild.  Where you could feel free.

“Jade?”  Jeff was looking puzzled.  Jade tore herself away from the pod.

“I’ve logged you in here,” Jeff said, leading her to a desk, and tapping at a computer.  “I’ll let you settle in before getting down to it.  Well, you know what you’ve got to do.  Will you be OK?”

She sat down.   She heard the living hum around her.  She placed her hands on the desk.  She felt the pulse of heat surging up through the veins and arteries of the building, from the energy at the deepest heart of the planet.  She felt the warmth of the sun that powered the building.  She felt the strength and power of the earth, she felt enveloped by nature, she felt at one.

A green thought in a green shade.

That was the poem she’d tried to remember. 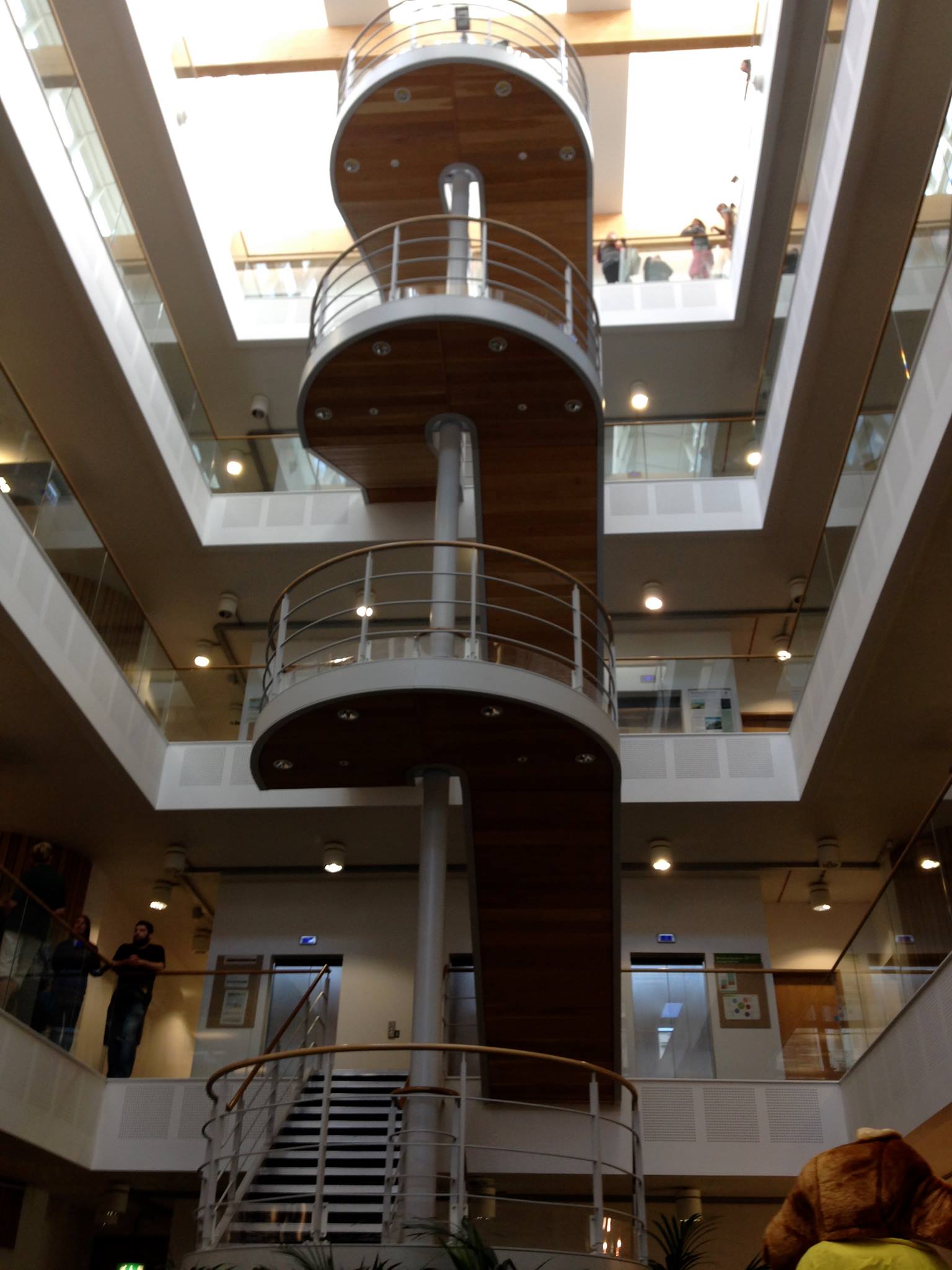 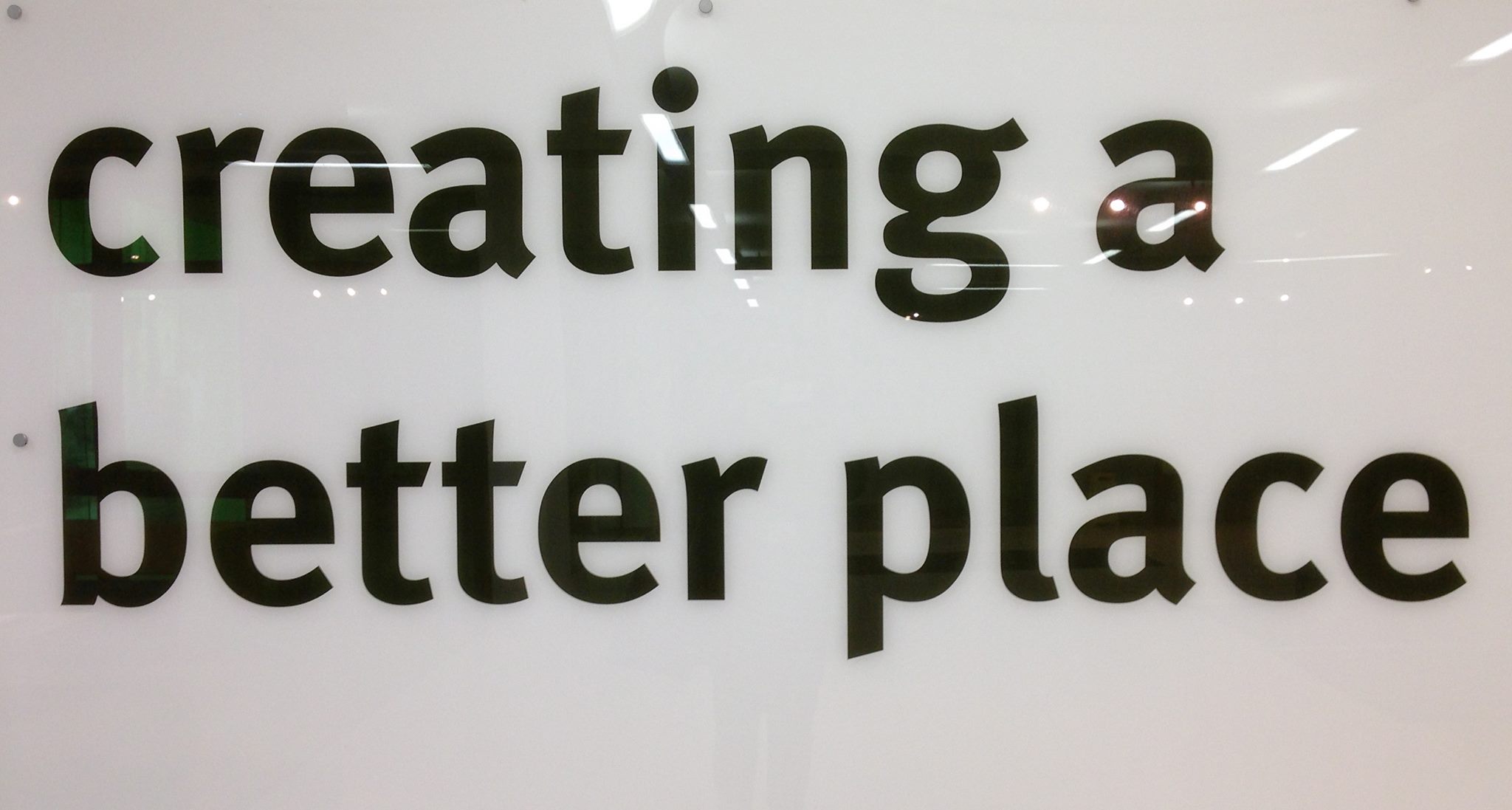