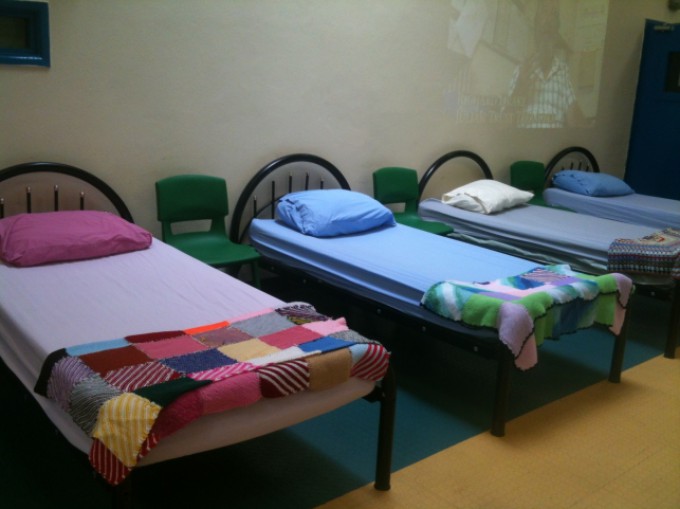 ‘The Julian Trust Night Shelter has two entrances, one for volunteers and one for the people that go there for hot food, tea and a bed for the night.  Soon after the overnight sleepers had left through one door, I was knocking on the volunteers’ door to start a day of listening, absorbing and writing.  The idea of being a writer-in-residence during the Doors Open day in a place that serves the night and the homeless sat with me throughout my time there.  I realised my task was to work with absences, the unsaid and unheard.  It also became apparent that to work with absence is not to work with nothing.  The continuous passing of people in and out of the shelter means it is a space that is full of traces, stories and voices. The shelter is minimal and clean, properties that lend itself to being an emergency stop-over, rather than a place where you’d want to stay.  I imagined the almost clinical aesthetic transformed into layers upon layers of stories and poems etched into the brickwork.

The Doors Open day saw the shelter transformed into a public space with guided tours, endless cake and balloons.  At first I thought this change in atmosphere would go against its usual night feel.  I then thought that any usual night feel would be impossible to track down as each person brings their own life stories.  As visitors and volunteers talked to me about the building I began to get overwhelmed by the multiplicity of voices and anecdotes.  Centring myself and tuning into the recurring themes led my writing.  The incredible dedication of the volunteers inspired every visitor I spoke to and defined ‘shelter’ as a support web that extends beyond the physical properties of the building.  I chose to write a sequence poem entitledShelter in order to explore how we understand the term.  I wove together snippets of conversations with the history of building and the land before it was built in 1974.

The first poem, Harvest, gave voice to the agricultural land in the 18th Century that fed the city.  I then tied this history into the present.  At this time of year, the shelter receives more food donations than usual in a reinvention of harvest time.  ‘Shelter’ meaning nourishment and growth.  The second poem, Sugar, refused to not be written.  Everyone was talking about sugar— sugar in their tea, mounds of sugar in the store room.  The site was a sugar invert factory that boiled raw muscovado into refined sugar with a higher sweetness value.  My third poem,Earplugs, explored the shelter as a soundscape.  And my final poem, Peep Hole, gives a glance into the tension between the shelter as a place where the homeless are watched and supported.

After getting my head down and writing during the day, the performance and the public’s emotive responses reinforced the importance of listening and ‘giving voice’ in such a space.’

(Click here to listen to a recording of the original performance)

to survive and sunlight

to feed our city

Now harvest time has its own rhyme —

waiting in line to be warmed

Stirred in pans so big

they echo back the food we put in.

Ladles the size of cradles

our taste buds are pacing

the streets, the cold concrete

we’ll see each other

while we shovel sugar

to calm the shivering

the sips that nourish us.

1 lump for the bump on my brow

2 for the pile of shoes that go unused

3 for the stables and strong ale

4 for an open door that closes

5 for the lightning strike that ripped the outside in

6 for silent and suspicious

7 for digging deep beneath the rubble bed

8 for sunlight squares above my head

9 for time to wake up like a bomb going off

10 for a den to stop trench-foot

12 for burnt treacle, hard to get rid of

14 for my unrefined stories saying as much as the unsaid

15 for woollen blankets and twitching legs

16 for the slow burn of cigarette

17 for underpass, mattress of smashed glass

18 teaspoons of sugar for Meg, for this night, this bed.

Listen the muffled footsteps of him

shuffling away in a misty dream

as he loads up his shoulders

with tents tearing at the seams.

The heating pipes are creaking

are clanking against the other-side.

Is that the tap dripping or the clock

sipping away my sleep-time?

The sound of sugar settling

When he turns over, the other moans.

I can hear the laundry drying.

Impossible to decipher where one voice ends

someone coming down the stairs.

The snores almost making a rhythm I can bear.

We watch through post-box gaps

for a quick light up

we glance for a chance

down the old path

where everything is blue-washed. 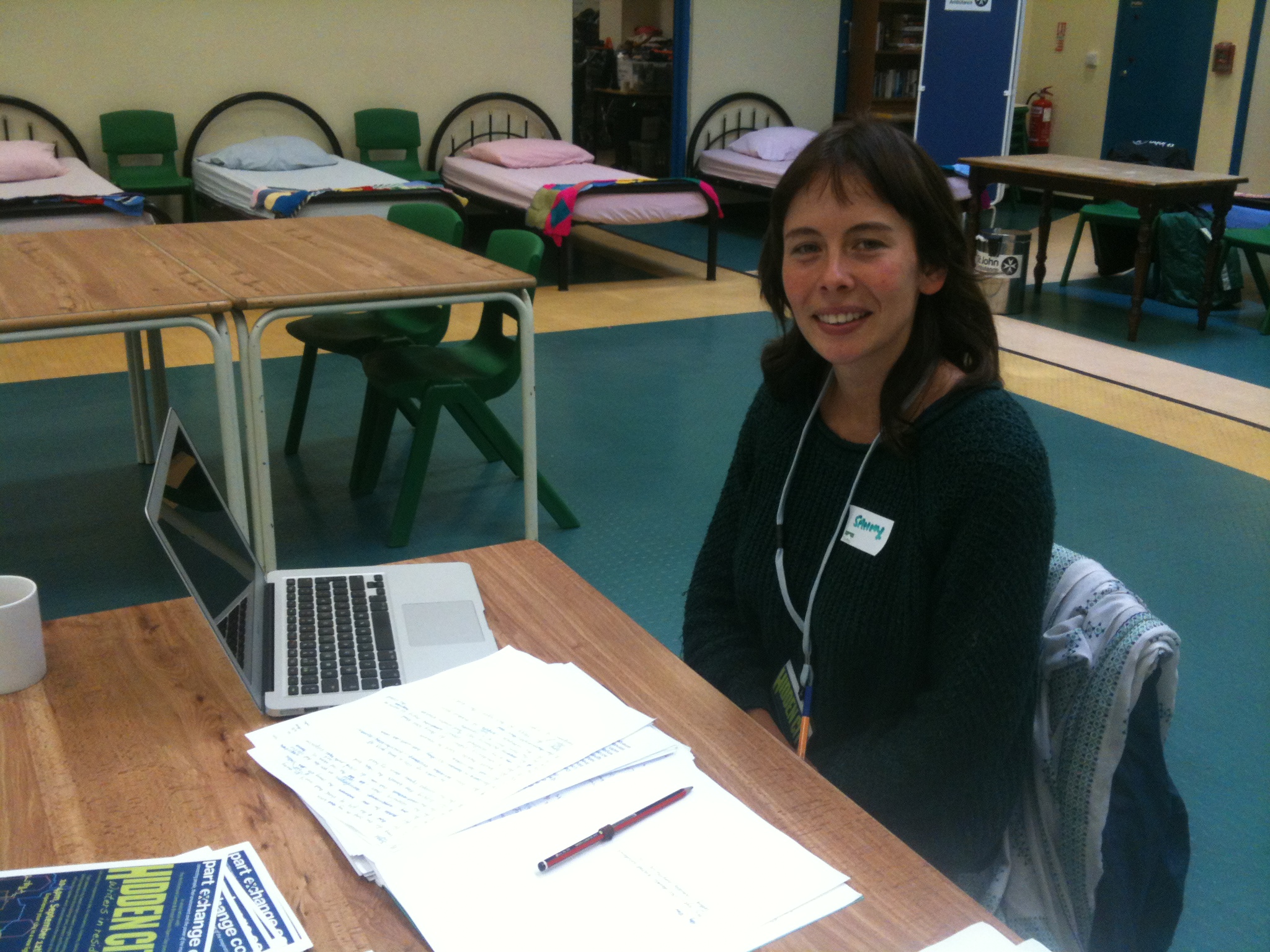 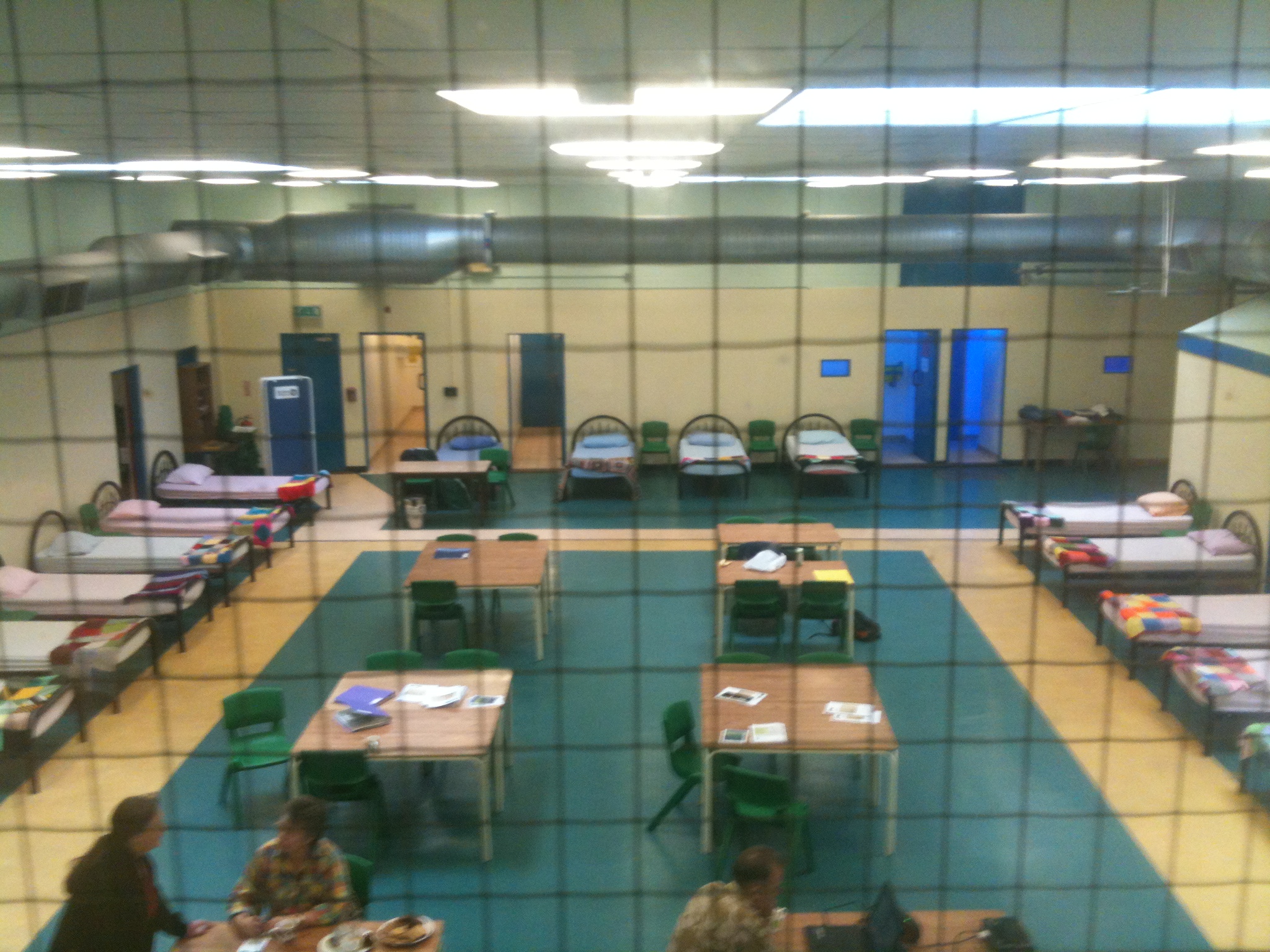 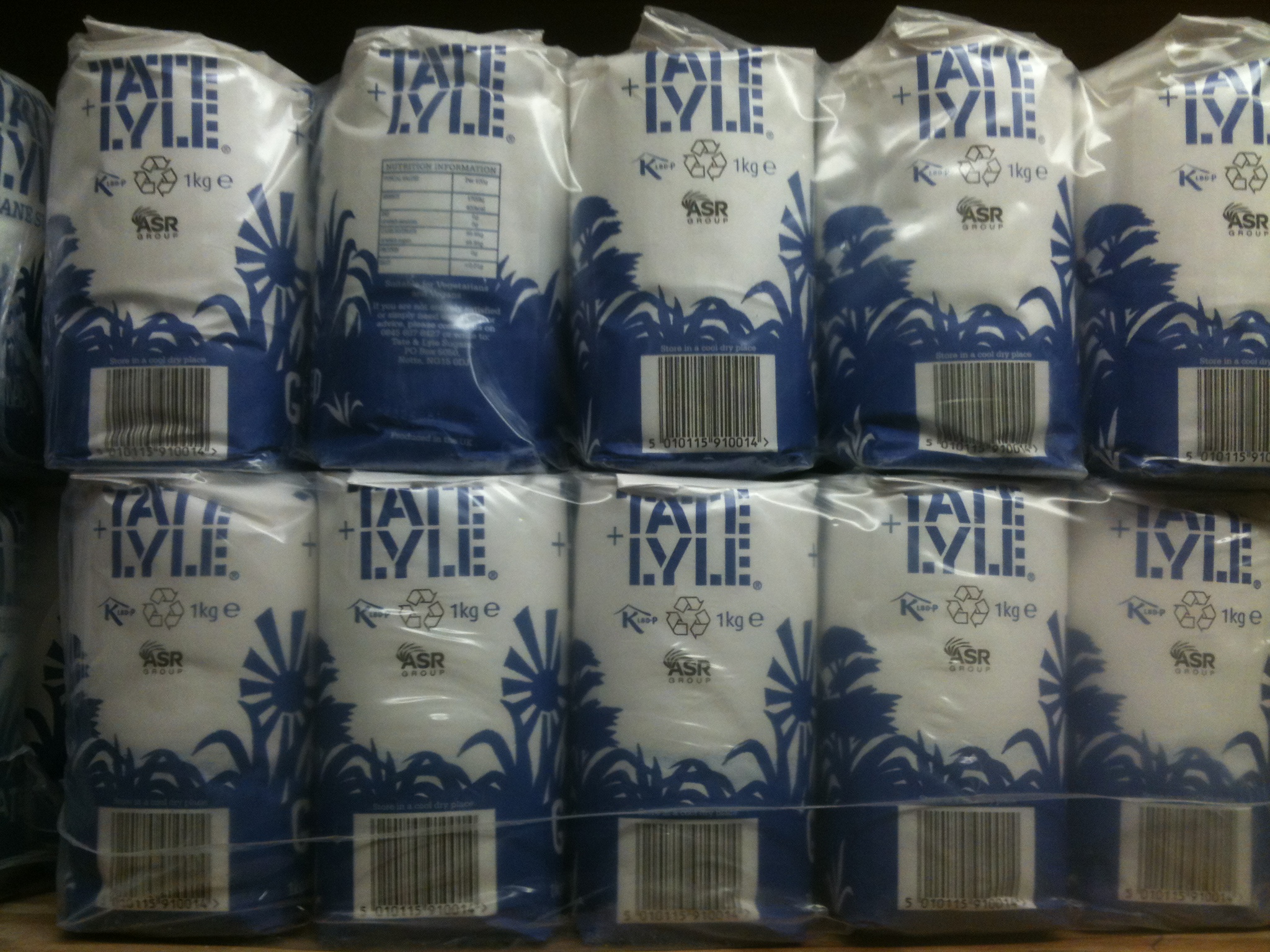 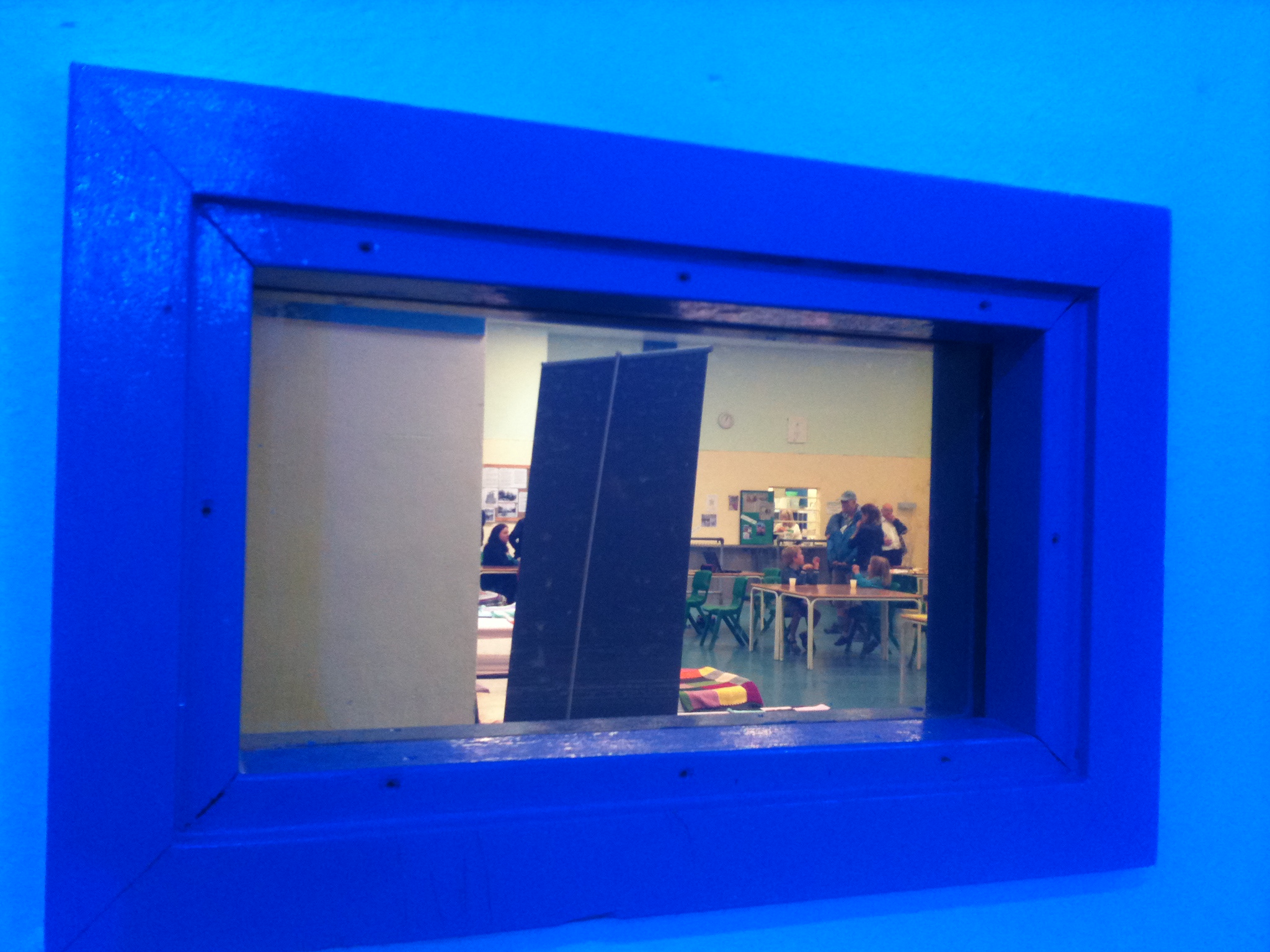